The France Merrick Performing Arts Center and Hippodrome Theatre are accessible to all patrons. Guests with accessibility questions or who require additional assistance may call (410) 752-7444.

Originally built in 1914, the 2,248-seat renovated Hippodrome Theatre brings the best of touring Broadway and Music to Baltimore, in the heart of the Bromo Tower Arts & Entertainment District.

Our theatre is rented for programming by various parties and we do not take part in content decisions or turn away clients based on the content they propose presenting. We understand that not everyone will find a show’s content appropriate for them and their guests and not everyone will choose to attend every show that is presented in our theatre.

All persons and bags are subject to search. Sharp objects*, weapons and illegal contraband are not permitted into the venue. For your own safety, and that of all of our patrons, guests may be required to undergo electronic security screening at the entrances to the Theatre.

The items listed below, and any additional items that Theatre management determines could potentially distract from the audience’s safety and enjoyment, are prohibited items which will not be allowed inside the venue*. The Theatre reserves the right to eject or bar entry to patrons who have such prohibited items in their possession. No refunds will be given. For your convenience, please make other arrangements for these items before arriving. The Hippodrome Theatre no longer has a bag check. You will not be permitted to re-enter the venue once you leave. 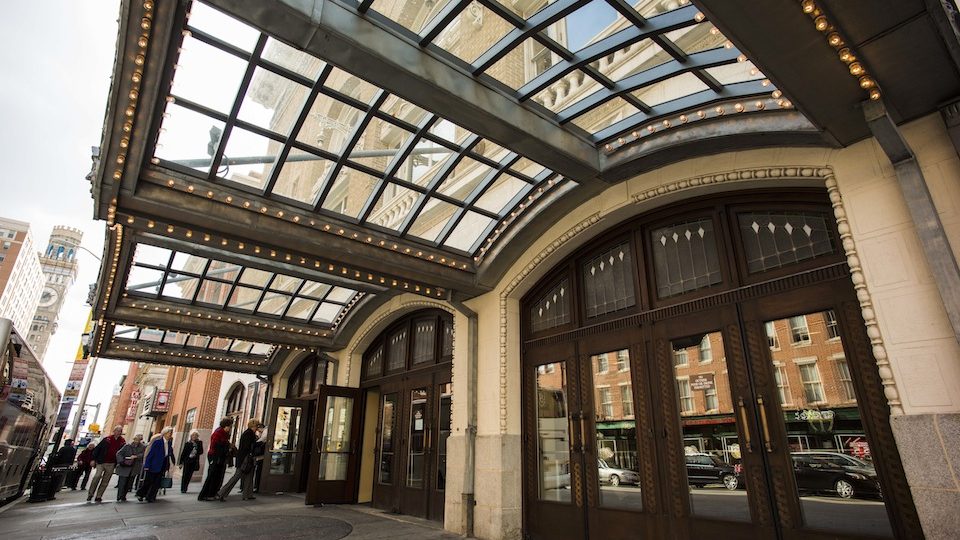 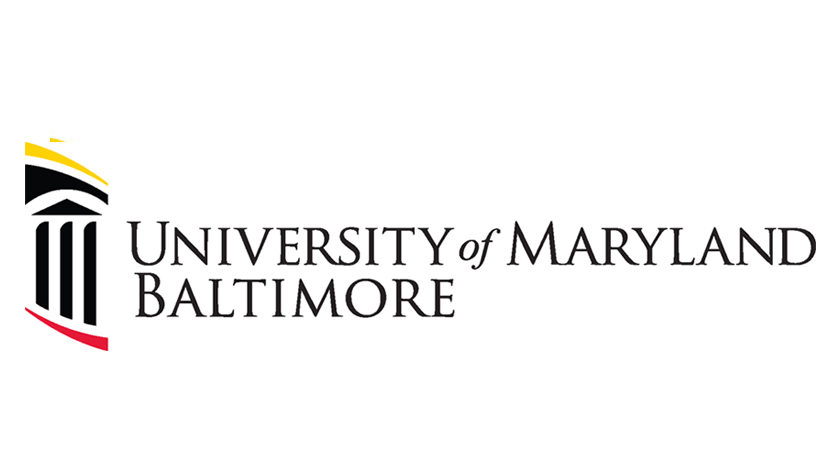 There is a drop-off zone located in front of the theatre on Eutaw Street.

Accessible Seating for wheelchair and limited mobility needs are available. Please specify your need for this seating when purchasing tickets. Patrons should purchase tickets a minimum of two weeks in advance of a performance by calling 443.703.2444 or by emailing access@baltimorehippodrome.com.  If you need assistance in the theatre, please find the closest volunteer usher or see someone at the Box Office.

Assisted Listening Devices amplify and clarify sound and are available at all performances. Infrared assistive listening systems are installed in the theatre and headsets may be used at any seat. Assisted Listening System headsets are available on a first-come, first-served basis. Patrons may inquire at the Patron Services Window near the Box Office. A driver’s license or credit card identification must be left during the performance until the headset is returned.

Using a wireless headset, patrons can listen to a trained audio describer narrate the visual elements of the performance. Live Audio Description is available during the performance dates/times listed below or upon request for select performances throughout the season. These requests are subject to the availability of an interpreter and are provided at the discretion of management. Patrons should call the Box Office at 443.703.2444 or email access@baltimorehippodrome.com at least two weeks prior to a performance.

There is an earpiece with a wire that connects it to the receiver.

Additional performances available upon request at least 2 weeks prior to each performance.

Please see below for relevant ASL Performances at the Hippodrome Theatre. You can also call or email the Box Office accessibility line at 443.703.2444 or access@baltimorehippodrome.com for more information.

Additional performances may be available upon request at least 2 weeks prior to the performance. These requests are subject to the availability of seating and an interpreter and are provided at the discretion of management.

Open Captioning is a text display located close to the stage that scrolls words in synchronization with the performance. Open captioning performances are scheduled for the below indicated dates and times.

To purchase tickets for Open Captioning Performances that are currently on sale, call or email the Box Office accessibility line at 443.703.2444 or access@baltimorehippodrome.com for more information.

Please note: Open Captioning seats are limited to left orchestra and it is advised to purchase as soon as possible due to limited to availability.

GalaPro opens the curtains to a universal cultural experience by delivering automated services to the user’s own mobile device.

At this time, the following shows offer services through the GalaPro App:

*Please check back as more shows may be added!*

When possible, Braille Playbills are available at the Patron Services Window by the main box office. A driver’s license or credit card identification must be left during the performance until the Playbill is returned. 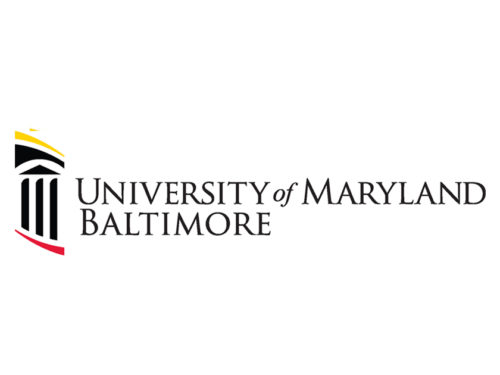 Effective May 3rd, 2022, The Baltimore Grand Garage will no longer accept cash as payment for Hippodrome, Ravens, Orioles, and other special event parking.

A Visa, Mastercard, Discover Credit/Debit card are the only accepted forms of payment.

Take the Fayette Street side elevators directly into the Hippodrome lobbies without setting foot outside. For easier access to the main Box Office for Will Call, we encourage you to take the Paca Street elevators and walk to the corner of Eutaw and Baltimore Street.

Disclaimer: Parkers who use the Grand Garage assume all risk of loss or damage to vehicles and persons using the Grand Garage. The owner and operator of the Grand Garage, Hippodrome Foundation, Inc., Hippodrome Theatre, TMG Hippodrome, LLC and each of their respective parents and affiliates are not responsible for, and assume no liability for, fire, theft, damage or loss to any vehicle, or for injury to any person or property as a result of use of the Grand Garage. Posted parking rules and instructions of parking attendants must be followed to avoid towing, fines and possible criminal penalties and loss of the opportunity to park in the Grand Garage. 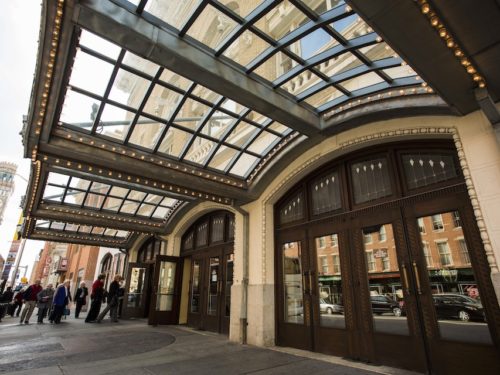 The legendary Hippodrome Theatre was designed by noted theatre architect Thomas Lamb for exhibitors Pearce and Scheck. It was constructed on the site of the old Eutaw House, a luxury hotel built in 1835. The Hippodrome opened on November 23, 1914 as a movie palace that also showcased vaudeville performances. The theatre seated 3,000 and in 1920 the average weekly attendance was 30,000. Sound for the movies was provided by piano, a Moller organ commissioned for the theatre, and an orchestra. The Hippodrome was part of the Loew’s Theatre chain from 1917 until 1924, when it became part of the Keith chain. New management in 1931 installed a huge new marquee and other facelift items such as new seats. In 1931 the Hippodrome had 3 price levels – 25 cents before noon, 35 cents between noon and 6 pm, and 50 cents after 6 pm. Under the management of Isidor M. Rappaport, which began in 1931, the Hippodrome gained a reputation as a top vaudeville house, presenting such notables as Bob Hope, Jack Benny, Red Skelton, Benny Goodman and his orchestra, Dinah Shore, Martha Raye, Milton Berle, the Andrews Sisters and Morey Amsterdam during Rappaport’s 30-year tenure. It was in The Hippodrome Theatre that Frank Sinatra first appeared with the Tommy Dorsey Orchestra and in 1939 with Harry James’ band. Movies were combined with vaudeville entertainment through 1950. The Hippodrome Theatre was one of the first stages to present Vaudeville and motion pictures and maintained a house orchestra at the theatre well into the 1950’s.

Business remained strong from the 30’s through the 1950’s with the last stage shows presented around 1959. Another major renovation occurred in 1963 in preparation for the regional premiere of “Cleopatra”. In 1969 the Hippodrome was the site of the world premiere of “Slaves”. Business dropped off during the 70’s and 80’s, and the Hippodrome closed in 1990, when it was the last operating movie theatre in downtown Baltimore.

Now the curtain rises again at The France-Merrick Performing Arts Center at the Hippodrome. This is the culmination of a construction and restoration project that transforms and combines three significant historic buildings and one newly constructed building into a state-of-the-art showcase. These landmarks are the Western National Bank built in 1887, the Eutaw Savings Bank built in 1888, the Hippodrome Theatre, and a new building at the corner of Baltimore and Eutaw Streets. Programming at this world-class venue will include touring Broadway shows and the best of the performing arts. 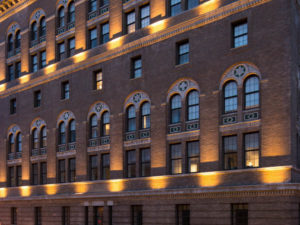 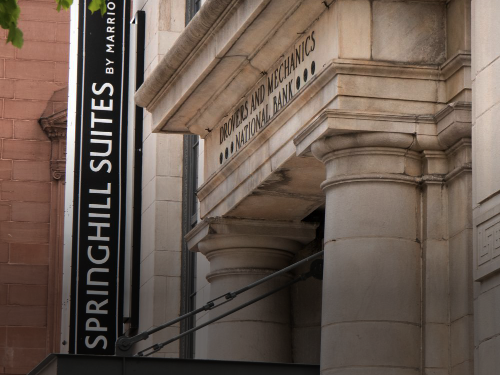