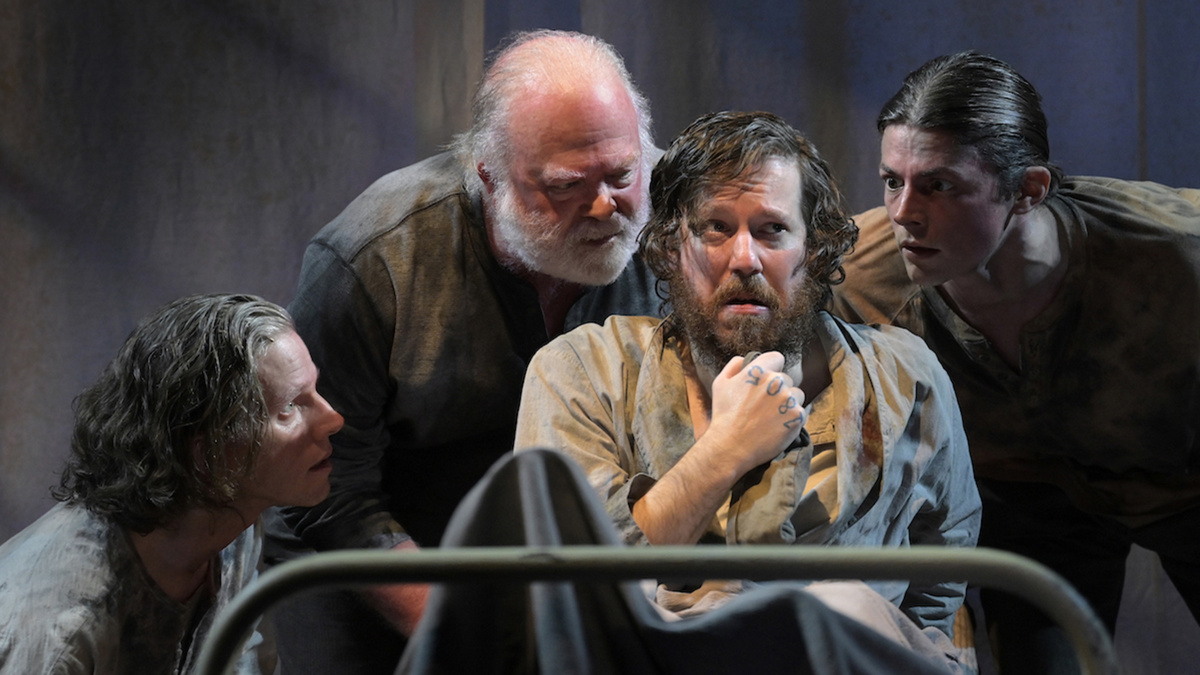 Why John Gallagher Jr. Joined New Musical Swept Away Before Reading the Script

John Gallagher Jr., a Tony winner for his featured performance in Spring Awakening, is back on stage in the world premiere of Swept Away at California’s Berkeley Repertory Theatre. The musical, which features the music of The Avett Brothers, has a book by Tony winner John Logan and tells the story of four men who survive a shipwreck and are stranded out at sea. Here, Gallagher Jr. chats with Broadway.com editor-in-chief Paul Wontorek about why he said yes to the production before even reading a script, the “full-circle” moment he has with music and more.

After first getting involved with the project in 2017 and announcing a 2020 debut that was then delayed due to the theater shutdown, Gallagher Jr. shares about what it’s like to finally perform Swept Away to audiences. “It’s surreal for all of us to be coming back to being on stage after this drought,” he said. “It’s been a long gestation period. I think all of us are pinching ourselves that we’ve been given the keys to the kingdom, so to speak, which is the chance to be together in a rehearsal room again, to be working on a new piece and to be getting up on stage.”

This marks the third time Tony winner Michael Mayer has directed Gallagher Jr., having previously worked with the actor on Spring Awakening and American Idiot on Broadway. Their frequent collaboration is just one of many reasons why Gallagher Jr. was so keen to join the production. “Where it all began for me was the music of The Avett Brothers. I’ve been a big fan of theirs for years. I had an Avett Brothers poster in my dressing room that I looked at before I went on stage every night [on Broadway] so it’s this kind of kismet full circle moment,” he said. “The fact that an Avett Brothers show randomly fell into my lap, being directed by one of my closest collaborators, was such a no-brainer. I agreed to do it before there was even a script. I said, ‘Absolutely, I don’t even know what it’s going to be and I don’t care. If it’s Michael Mayer and it’s The Avett Brothers, that sounds like a dream come true, sign me up.’  Lo and behold, John Logan, the masterful dramatist that he is, came on board to write our book and it’s stunning. If you took the songs out of the piece it would stand alone as an amazing play.”

Swept Away has been playing to audiences since January 9 and has received three extensions, setting it to run through March 13. “I would love nothing more than to see this have a life beyond because I do think it’s good enough,” Gallagher Jr. said of the musical’s future. “I definitely think it’s one of the best pieces of theater that I’ve been involved in, which is saying something. Nothing would make me happier than being able to bring it to New York and share it.”

Watch the interview below, and head here to check your local listings for The Broadway Show. Hosted by Emmy-winning anchor Tamsen Fadal, it is the only nationally syndicated weekly theater news program.