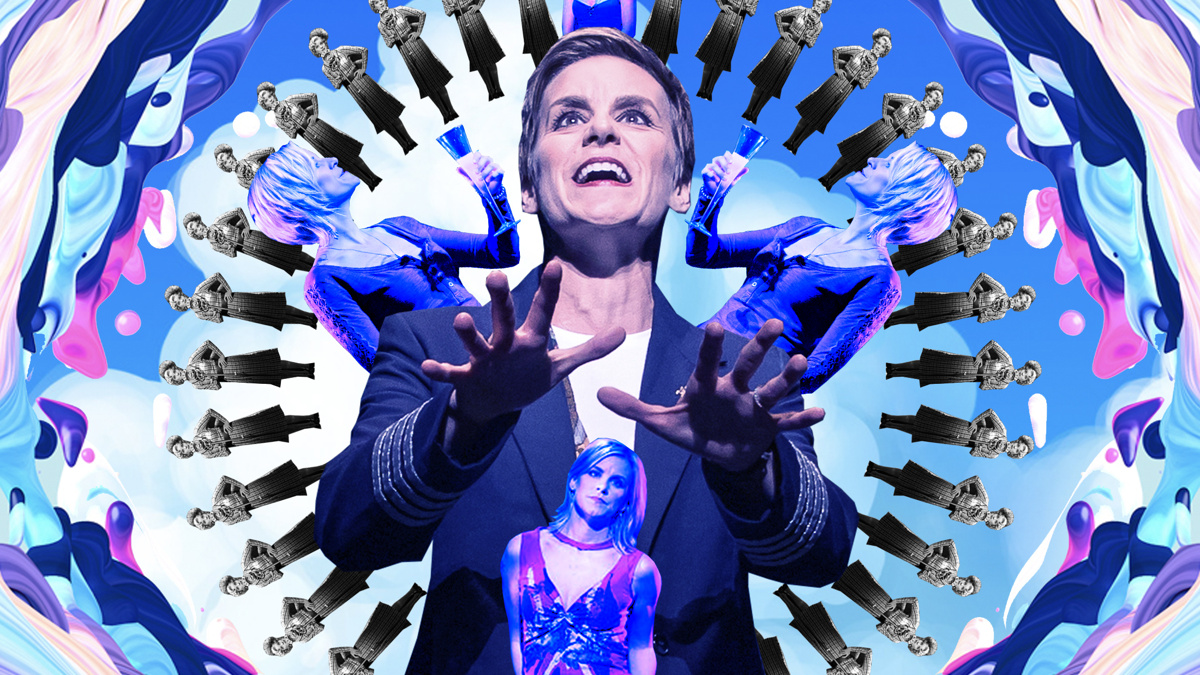 Jenn Colella is known for her Tony-nominated performance in Come From Away, which she reprised for Apple TV+’s film adaptation. Prior to performing the show-stopping number “Me and the Sky” as Captain Beverly Bass, Colella was seen in a bevy of Broadway musicals. She made her Broadway debut in 2003, starring in Urban Cowboy, based on the 1980 film of the same name. In 2006, Colella took on the role of Laura in High Fidelity, another musical based on a movie of the same name. In 2012 she took on the role of Hedda Hopper in Chaplin.  Colella went on to appear in If/Then in 2014 in a starry cast led by Idina Menzel, and she then began her journey with Come From Away, which resulted in her first Tony nomination and longest stint on Broadway. Here, she chats with Broadway.com Editor-in-Chief Paul Wontorek about her career while visiting her former theater homes.

On making her Broadway debut as Sissy in Urban Cowboy: “I got to ride a bull and start a bar fight. I had two very dashing leading men, and I remember one of the slogans was ‘the best butts and biggest hearts on Broadway.’  I didn’t even know [closing] was a possibility. I signed a year contract, right? When I came in after the opening night and everybody was kind of dour, sitting on stage and having a meeting, I was like, ‘What’s wrong? Wasn’t that a fun party? What’s going on?'”

On playing Hedda Hopper in Chaplin: “I’ve loved every show I’ve ever done but this was a very, very special piece for many reasons. It was my first villain role and I got to be all twisty-moustache. It was just delightful.”

On being a secret cover for Idina Menzel in If/Then: “I played Anne but was a secret second cover [for Idina Menzel]. It wasn’t even in the program. I went on once for her on a Wednesday matinee. I remember her coming into rehearsals early and being like, ‘I just finished this Disney thing. I don’t know how it’s going to turn out.’ It turned out to be Frozen and we were like, ‘It turned out OK for you.'”

On starring in the short-lived High Fidelity: “It ran for two weeks and it was super sad when it closed. A lot of us were there from the beginning and it takes years and years and years to get things going and then to only have two weeks—it’s a gut punch. It’s just so shocking. But the cast album is available, and it’s dope.”

On playing Captain Beverly Bass in Come From Away: “It’s the little show that could and still does. I like being part of the herd. I like being in the ensemble. So, every time I had to step forward [to sing ‘Me and the Sky’], it was scary. The best part of that song is when the girls step up behind me and I know they’re about to sing with me and I’m folded back into the ensemble.

Watch the video below, and head here to check your local listings for The Broadway Show. Hosted by Emmy-winning anchor Tamsen Fadal, it is the only nationally syndicated weekly theater news program.