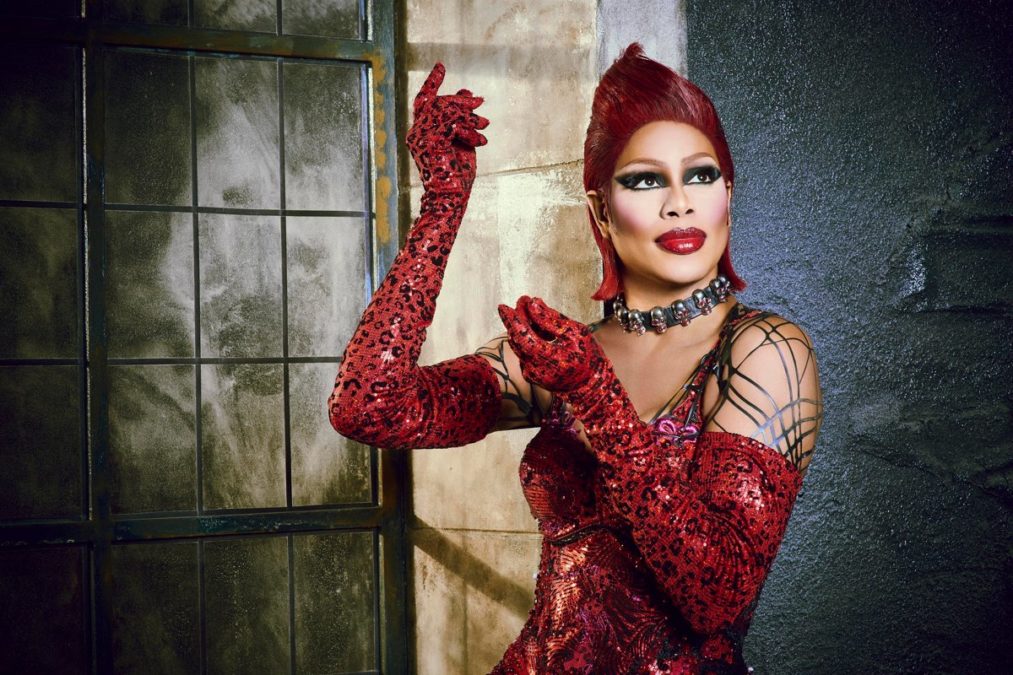 Laverne Cox on Finding Her Voice for Rocky Horror

Laverne Cox is no stranger to the screen, from her Emmy-nominated turn on Orange is the New Black to appearances in the films Grandma, 36 Saints and Grand Street. Now, she has audiences shivering with antici…pation to hear her sing out as Dr. Frank-N-Furter in Fox’s TV remake of The Rocky Horror Picture Show. In the interview below, Broadway.com chats with Cox about Rocky Horror memories, what it means for a trans actress to play a “sweet transvestite,” channeling Little Richard and loving Tim Curry's naughtiness.

How familiar were you with Rocky Horror before this project?
I knew every word and every song. I had seen the movie countless times. I didn't know the "Once in a While" song; it's Brad's song that was cut from the movie. Ryan McCartan sings it exquisitely. But everything else, I knew.

Were you big on midnight showings and shadow casts?
No, that was never a part of my Rocky experience. I discovered Rocky in my dorm when I was a freshman at Indiana University. Some kids in my dorm were talking about it, and they were like, "You have to watch this movie." I saw it, bought the soundtrack, and learned every word of dialogue. I was obsessed.

I’m sure Tim Curry was an icon to you, then. What was it like having him on set?
The day I met Tim, I left my body. Back in January, I couldn't believe we were finally at our first day of rehearsal, and I'm there and the whole cast is there, and Tim is there. We sang all of the songs from the show. I had to sing in front of Tim Curry! He was lovely and so enthusiastic to be a part of our production. He's still kind of naughty, which is great—that British sort of naughty, cheeky humor that I've always loved.

Dr. Frank-N-Furter is traditionally played by a man, and is described as a “sweet transvestite from Transsexual, Transylvania.” As a trans actress, was the character’s identity and that terminology a challenge to navigate?
That was my biggest apprehension. But Kenny Ortega and I were talking about this being set in 1975, and the whole premise of the movie wouldn't happen if Brad and Janet didn’t need a telephone to call a repairperson. Now, you'd use your cell phone. I talked to some trans elders from that era, and in 1975, “transvestite” was a term used to refer to a trans person who had not completed their medical transition. Sylvia Rivera, who historically identified as female and what we would identify today as a trans woman, started an organization in 1971 called STAR: Street Transvestite Action Revolutionaries. So language evolves over time, and it’s a term that now we understand as someone who cross-dresses. I never want to tell people how they want to refer to themselves, but generally speaking, trans people don't use that term in 2016. But at the end of the day, I'm an actress, so God willing, I'll be able to play a variety of characters.

We’ve seen your acting work on screen before, but hearing you sing will be a new experience for many people. Singing is nothing new for you though.
At IU, I started voice lessons for the first time. In college, I was singing in a baritone range, because my voice is naturally very low. When I got to New York [to attend Marymount Manhattan College], I discovered my head voice, and I started singing exclusively really high for years, because as I transitioned, it was difficult for me to embrace the low part of my voice. In May of 2015, I found this brilliant voice teacher Liz Caplan, who works with everybody on Broadway, and I started working on my chest voice. Then Frank-N-Furter came along, and it was kind of perfect.

What did that process of finding Frank-N-Furter’s voice entail?
The process of finding my voice as Frank-N-Furter was about me accepting all of my voice, from the low to the high and everything in between. Those baritone tones are perfect for Frank, but it was awesome that I had this whole other side of my voice that I've been cultivating for years. I'd work with my opera teacher Ira Siff, who I've been working with on-and-off forever. Also, when I laugh as Laverne, it tends to be high-pitched, but Frank-N-Furter's got to be [laughs maniacally in a lower register]. So now, I laugh as Frank-N-Furter sometimes. Frank took over my life!

How do you find the balance between those two sides of your singing voice?
For me, I was really interested in finding those covered, dark, round tones, because of my interest in opera. But sometimes, those sounds aren't appropriate for Frank-N-Furter. I wanted to find places where we could play with my head voice. So we get that in a few moments. Not excessively, though. When I was recording “Wild and Untamed Thing,” [producer] Lou Adler heard me vocalizing. He asked me to come out of the recording booth, and he was like, "Watch this." It was a video of Little Richard singing "Long Tall Sally." He’d do those Little Richard “wooos,” and we were like, “OK, let's play with that.” It was such a wonderful collaboration. The great thing about Rocky Horror is that it's about giving yourself over to biggest possibilities of your life. “Don't dream it, be it.” To allow yourself to use your full voice is a metaphor for owning everything you are.

We’ve seen a lot of your Orange is the New Black cast members on Broadway, including Danielle Brooks and Kimiko Glenn. Is there a musical theater role out there you’d love to play?
I've been thinking about Bess in Porgy and Bess, which is very demanding. It’s very dramatic, and my voice is more a lyric soprano. Bess is so tortured. There's something about these women. She’s thought of as this loose woman by people, and she falls for Porgy. It becomes this unhealthy love, and of course there's the drug addiction. It's a really interesting character, and that Gershwin music is so fantastic. And it's not a musical, but I also want to do Lady Macbeth someday. We'll see!