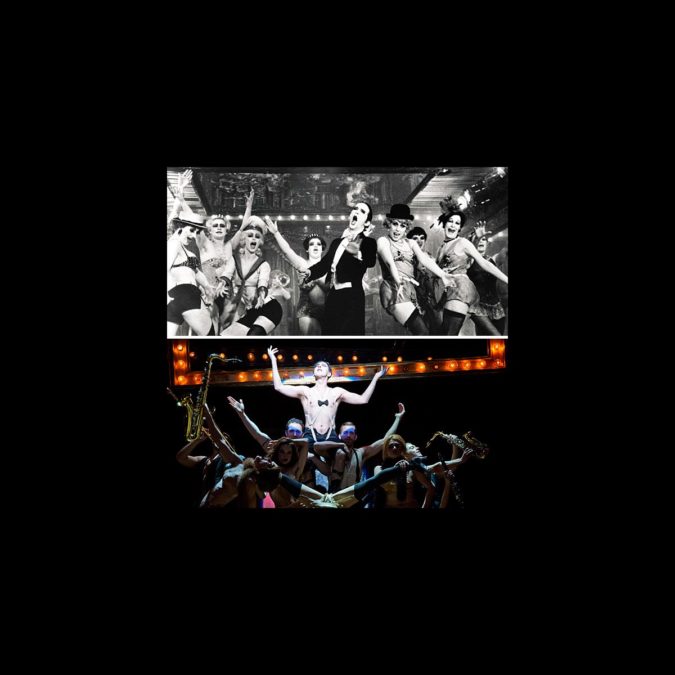 Cabaret Undressed! The True Stories Behind the Broadway Hit

Willkommen back to Broadway, Cabaret! The classic Kander and Ebb musical has arrived for a return engagement on the Great White Way, with Alan Cumming reprising his Tony-winning performance as the Emcee alongside Oscar nominee Michelle Williams, who is making her Broadway debut as British cabaret singer Sally Bowles. In the iconic tale set in 1930s Berlin, the Emcee holds court over the seedy Kit Kat Klub, where Sally strikes up a relationship with an American writer, Cliff. Cabaret opens at Studio 54 on April 24, but a classic isn't born overnight! Read on for a look at what has long made Cabaret such a crowd-pleasing, game-changing favorite.

Welcome to Berlin
The Weimar Republic, which flourished between Germany's defeat at the end of World War I and Hitler's rise to power in 1933, was a vibrant cultural period famous for its music, film, art and philosophy, as well as its tolerance of decadent behavior (including prostitution and homosexuality). 1920s Berlin was the center of Weimar culture, but when the Nazi Party began rising to power, this liberal mecca started crumbling as artists and intellectuals fled to safer shores.

Capturing a Culture
Writer Christopher Isherwood compiled his experiences living in Weimar Berlin into a semi-autobiographical collection of stories, Goodbye to Berlin, in 1939. The character of Sally Bowles was based on German nightclub singer Jean Ross—her name was borrowed from composer Paul Bowles. British playwright John Van Druten adapted Isherwood's work into the 1951 Broadway play I Am a Camera, which was panned by the critics (Walter Kerr of The New York Times famously said, "Me no Leica"), but won actress Julie Harris the first of five Tony Awards for playing Sally.

Broadway Tug-of-War
After his musical The Boy Friend became a big hit in the West End and on Broadway in the mid-'50s, composer/lyricist Sandy Wilson adapted I Am A Camera into a musical, only to find that the rights had been scooped up by producer Harold Prince. Prince commissioned Joe Masteroff to write the musical's book, but the pair agreed that Wilson's take on the material didn't feel authentic to 1920s Berlin. Instead, they enlisted John Kander and Fred Ebb to write the score, and Wilson got the boot.

The Evolution of the Emcee
When it came to creating the world of Cabaret, director Hal Prince recalled his own time in Germany as a young man in the army—specifically a Stuttgart nightclub called Maxim's. "There was a dwarf MC, hair parted in the middle and lacquered down with brilliantine, his mouth made into a bright red cupid's bow, who wore heavy false eyelashes," Prince explained in The Making of Cabaret. Joel Grey, who created the role of the Emcee on Broadway, came up with the white-faced, pink-cheeked look that defined the role for decades. "I found this greasepaint called 'Juvenile Pink,' and I thought to myself, 'This creep, he would want to look young, and this is what he would use,'" Grey recalled.

Redefining Broadway
When Cabaret opened in 1966, it turned the idea of a Broadway musical on its head. There was no overture—instead, audiences were caught off-guard by a drumroll and loud cymbal crash. A giant mirror reflected the audience back on itself. The story dealt with everything from anti-Semitism to abortion, which was unusual for the day. "This marionette's-eye view of a time and place in our lives that was brassy, wanton, carefree and doomed to crumble is brilliantly conceived," wrote New York Times critic Walter Kerr.

At First, Liza Didn't Get the Part
The 1972 film version of Cabaret was just as successful as its stage debut, due in part to its magnetic leading lady, Liza Minnelli. But the young actress had initially tried out for the Broadway musical, and didn't get the part of Sally. "I knew I'd get the movie for some reason," Minnelli told The Huffington Post. "I remember saying to myself, 'That's all right, I'll do the film." Minnelli not only got her wish, but she won an Oscar for her performance, alongside original Broadway star Joel Grey as the Emcee and director Bob Fosse. And as an added bonus, the film basically revived the whole concept of the movie musical, which had been languishing for years. Thanks, guys!

…And Wilder…
When Roundabout Theatre Company wanted to bring the production to Broadway, Mendes insisted they find an honest-to-God nightclub. After two years, they found Henry Miller's Theatre (now the Stephen Sondheim), which had previously been a nightclub called Xenon, and before that, an X-rated movie house. Renamed the Kit Kat Klub, the rundown theater's gritty atmosphere was just the place for the in-your-face revival.

The Toast of Mayfair
When Cabaret announced its return to Broadway, the question on everyone's mind was, who will play Sally? Anne Hathaway and Emma Stone were rumored to be interested in the part, but in the end it went to stage newbie Michelle Williams. Williams admitted that being the new girl makes her "feel like a baby" in rehearsal, but she has a champion in Liza Minnelli. "I’m excited to see what they will do with the show and am sure it will be great,” said Minnelli, calling the new star a "wonderful actress." Come to the Cabaret, Michelle! In here, life is beautiful…