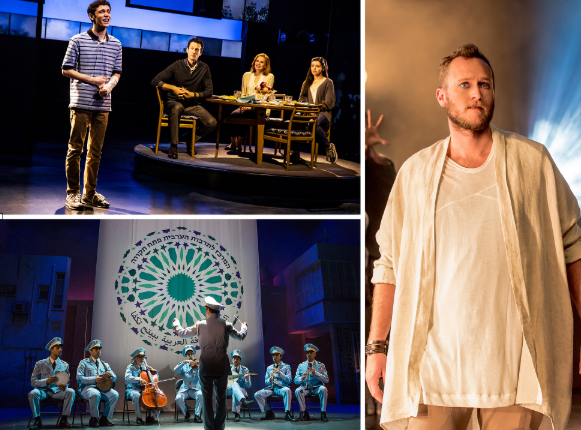 The biggest hits on the Great White Way are headed to Baltimore as part of the just-announced CareFirst Hippodrome Broadway Series 2019-2020 season!

Broadway blockbusters Dear Evan Hansen, Jesus Christ Superstar and The Band’s Visit will be part of the upcoming season. The series will also include The Phantom of the Opera, Disney’s Aladdin, Cats, Wicked, Summer: The Donna Summer Musical and Miss Saigon.

Learn more about all of these exciting stage hits below!

THE PHANTOM OF THE OPERA
October 9 – 20
Season Option
Cameron Mackintosh’s spectacular new production of Andrew Lloyd Webber’s The Phantom of the Opera returns! Critics are raving that this breathtaking production is “bigger and better than ever before” and features a brilliant new scenic design by Paul Brown, Tony Award-winning original costume design by Maria Björnson, lighting design by Tony Award winner Paule Constable, new choreography by Scott Ambler and new staging by director Laurence Connor. The production, overseen by Matthew Bourne and Cameron Mackintosh, boasts many exciting special effects including the show’s legendary chandelier. The beloved story and thrilling score—with songs like “Music of the Night,” “All I Ask Of You” and “Masquerade”—will be performed by a cast and orchestra of 52, making this Phantom one of the largest productions now on tour.

JESUS CHRIST SUPERSTAR
December 17 – 22
Jesus Christ Superstar is an iconic musical phenomenon with a world-wide fan base. In celebration of its 50th anniversary, a new mesmerizing production comes to North America. Originally staged by London’s Regent’s Park Open Air Theatre and helmed by the acclaimed director Timothy Sheader (Crazy for You, Into the Woods)and award-winning choreographer Drew McOnie (King Kong, Strictly Ballroom), this production won the 2017 Olivier Award for Best Musical Revival, garnering unprecedented reviews and accolades. Appealing to both theater audiences and concert music fans, this production pays tribute to the historic 1971 Billboard Album of the Year while creating a modern, theatrical world that is uniquely fresh and inspiring. With music and lyrics by Emmy, Grammy, Oscar and Tony Award winners Andrew Lloyd Webber and Tim Rice, Jesus Christ Superstar is set against the backdrop of an extraordinary series of events during the final weeks in the life of Jesus Christ as seen through the eyes of Judas. Reflecting the rock roots that defined a generation, the legendary score includes “I Don’t Know How to Love Him,” “Gethsemane” and “Superstar.”

CATS
January 21 – 26, 2020
Cats, the record-breaking musical spectacular by Andrew Lloyd Webber that has captivated audiences in over 30 countries and 15 languages, is now on tour across North America! Audiences and critics alike are rediscovering this beloved musical with breathtaking music, including one of the most treasured songs in musical theater—”Memory.” Winner of seven Tony Awards, including Best Musical, Cats tells the story of one magical night when an extraordinary tribe of cats gathers for its annual ball to rejoice and decide which cat will be reborn. The original score by Andrew Lloyd Webber (The Phantom of the Opera, School of Rock, Sunset Boulevard), original scenic and costume design by John Napier (Les Miserables), all-new lighting design by Natasha Katz (Disney’s Aladdin), all-new sound design by Mick Potter, new choreography by Andy Blankenbuehler (Hamilton) based on the original choreography by Gillian Lynne (The Phantom of the Opera) and direction by Trevor Nunn (Les Miserables) make this production a new Cats for a new generation!

WICKED
February 12 – March 8, 2020
Season Option
So much happened before Dorothy dropped in. Wicked, the Broadway sensation, looks at what happened in the Land of Oz…but from a different angle. Long before Dorothy arrives, there is another young woman, born with emerald-green skin—smart, fiery, misunderstood and possessing an extraordinary talent. When she meets a bubbly blonde who is exceptionally popular, their initial rivalry turns into the unlikeliest of friendships…until the world decides to call one “good,” and the other one “wicked.” From the first electrifying note to the final breathtaking moment, Wicked—the untold true story of the Witches of Oz—transfixes audiences with its wildly inventive story that USA Today calls “a complete triumph! An original musical that will make you laugh, cry and think.”

THE BAND’S VISIT
March 17 – 22, 2020
Winner of 10 Tony Awards, including Best Musical! Spend an evening in the company of unforgettable strangers at The Band’s Visit—now one of the most celebrated musicals ever. It rejoices in the way music brings us to life, brings us to laughter, brings us to tears, and ultimately, brings us together. In an Israeli desert town where every day feels the same, something different is suddenly in the air. Dina, the local café owner, had long resigned her desires for romance to daydreaming about exotic films and music from her youth. When a band of Egyptian musicians shows up lost at her café, she and her fellow locals take them in for the night. Under the spell of the night sky, their lives intertwine in unexpected ways, and this once sleepy town begins to wake up. The Band’s Visit features music and lyrics by Tony Award and Drama Desk Award winner David Yazbek, and a book by Tony Award winner Itamar Moses. It is based on the screenplay by Eran Kolirin, and is directed by Tony Award winner David Cromer.

SUMMER: THE DONNA SUMMER MUSICAL
April 14 – 19, 2020
She was a girl from Boston with a voice from heaven, who shot through the stars from gospel choir to dance floor diva. But what the world didn’t know was how Donna Summer risked it all to break through barriers—becoming the icon of an era and the inspiration for every music diva who followed. With a score featuring more than 20 of Summer’s classic hits, including “Love to Love You Baby,” “Bad Girls” and “Hot Stuff,” the electric experience of Summer: The Donna Summer Musical is a moving tribute to the voice of a generation. Vogue calls it, “The new must-see Broadway musical of the moment. Don’t miss it! A vibrant and sparkling homage to the queen of disco. It’s the perfect place to dance to your favorite disco hits by the diva!”

DEAR EVAN HANSEN
May 5 – 17, 2020
Winner of six Tony Awards, including Best Musical! A letter that was never meant to be seen, a lie that was never meant to be told, a life he never dreamed he could have. Evan Hansen is about to get the one thing he’s always wanted: a chance to finally fit in. Dear Evan Hansen is the deeply personal and profoundly contemporary musical about life and the way we live it. Dear Evan Hansen has struck a remarkable chord with audiences and critics everywhere, including The Washington Post, who says Dear Evan Hansen is “one of the most remarkable shows in musical theatre history.” The New York Times calls it “a gut-punching, breathtaking knockout of a musical.” And NBC Nightly News declares the musical “an anthem resonating on Broadway and beyond.” Dear Evan Hansen features a book by Tony Award winner Steven Levenson, a score by Grammy, Tony and Oscar winners Benj Pasek and Justin Paul (La La Land, The Greatest Showman) and direction by four-time Tony Award nominee Michael Greif (Rent, Next to Normal).

MISS SAIGON
June 2 – 7, 2020
Experience the acclaimed new production of the legendary musical Miss Saigon! From the creators of Les Miserables, this is the epic story of a young Vietnamese woman named Kim who is orphaned by war and forced to work in a bar run by a notorious character known as the Engineer. There she meets and falls in love with an American G.I., an encounter that will change their lives forever. Featuring stunning spectacle and a sensational cast of 42 performing the soaring score, including Broadway hits like “The Heat is On in Saigon,” “The Movie in My Mind,” “Last Night of the World” and “American Dream,” this is a theatrical event you will never forget.